10% Discount Off This Activity When you book online until 31 December 2020!

View the Victoria Falls, Batoka Gorge and Zambezi National Park in this epic Zambezi helicopter flight. Exactly as the name suggests, this flight is Spectacular!

The 25 minute Zambezi Spectacular helicopter flight is exactly as the name suggests: Spectacular! This helicopter flight will initially take the same route as the shorter Flight of Angels. But instead of heading home after viewing the Victoria Falls, you will fly further down the impressive Batoka Gorge and contrasting landscapes. See how the Victoria Falls have carved massive cracks in the earth over millions of years.

Once you have seen the Batoka Gorge you will fly back over the Victoria Falls and head up the Zambezi River. Once you are a fair distance upstream the helicopter will turn left and fly over the Zambezi National Park. Here you will have the opportunity to spot some big game such as elephant, buffalo and many antelope species.

Once you have hopefully spotted some wildlife you will make your way back to the helicopter pad. Once you have landed safely you will have the opportunity to view some photos and a video from your trip. These photos and DVD's of your helicopter flight are available for purchase. Thereafter you will be dropped back off at your accommodation to prepare for your next Victoria Falls adventure.

Transfers from Victoria Falls based hotels

US$15 National Parks fees per person

US$15 fuel levy per person

This site uses Akismet to reduce spam. Learn how your comment data is processed. 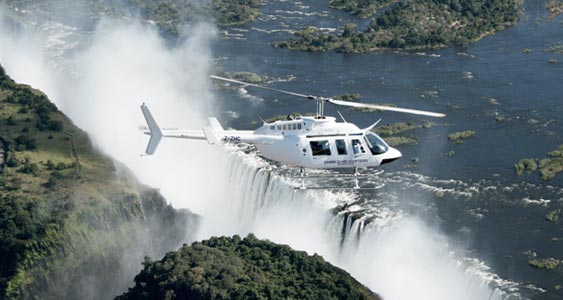 Why book with us?

How can we help you?

Why book with us?

Browse all the Victoria Falls activities

Get in touch today